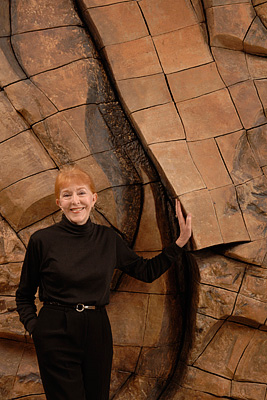 Roberta Griffith (born 1937, Hillsdale, MI), BFA, Chouinard Art Institute (1960), MFA Southern Illinois University-Carbondale (1962), is an American ceramic and ceramic installation abstract expressionist artist and painter. In addition to her degrees, Griffith studied art at the University of Michigan (1955-1957), and at the Instituto Allende, San Miguel de Allende, Guanajuato, Mexico (1957-1958). Roberta has been making art throughout her life. She began painting with oils at 10 years of age (1947), and working with ceramics at the University of Michigan (1956). As a Fulbright Grant recipient in Barcelona, Spain (1962-1964), she was mentored by ceramist Josep Llorens Artigas at L'Escola Massana School of Art and Design, Barcelona, Spain. This period was during the height of his 30-year ceramic collaboration with painter Joan Miro. 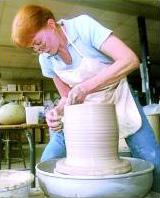 After working as ceramic designer at Design Tecnics in Stroudsburg, Pennsylvania (1965-1966), Griffith joined the faculty at Hartwick College (1966). She taught all levels of ceramics and drawing for 42 years until she retired from teaching as Professor Emerita in Art (2008). In addition to teaching art, she was appointed chair of the department for 17 years (1973-1990). She was named permanently to the Arkell Hall Foundation Endowed Chair Professor of Art (1979) until her retirement. Griffith continues to maintain art studios in Otego, New York and Princeville, Kaua'i, Hawai'i. Roberta Griffith is North American correspondent to Revista Ceramica, Madrid, Spain (1970s-current). Her MFA Thesis, "Ramey Incised Pottery," was published in the Illinois Archaeological Survey Series, Circular #5 (1981). She recently was made a member of the International Academy of Ceramics based in Geneva, Switzerland (2017). Roberta received the Albert B. Nelson Lifetime Achievement Award from Marquis, Who's Who in America (2018). Her biography is included in Marquis Who's Who in America, 71st edition (2018). Her artwork is included in art journals, art books, art museums, public and private collections in Spain, Mexico, Italy, England, Sweden, Japan and the USA. 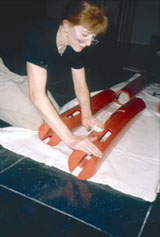 Roberta Griffith has exhibited in 36 solo exhibitions and over 250 invitational and juried exhibitions. She is best known for small and large mixed-media ceramic installations, and hand-built ceramic sculptures. The latter are made in series, many based on variations of a form incorporating wheel thrown shapes, hand formed bisque molds, or plaster press molds. Since the 1970's, the majority of her ceramic series and installations have been evocative of her associations of places and their cultural manifestations encountered via research and travel, with an underlying theme reflecting mortality, universal shortcomings, and disasters, both natural and man-made. In addition, her colorful abstract paintings, and figurative paintings, drawings and prints have won significant awards. She was awarded the National Association of Daughters of the American Revolution American Heritage Award for Women in the Arts in 2018 (24 awarded nationally). Roberta had a solo exhibition, ""Unpleasant Conversations"" in the Holt Gallery of the Honolulu Museum of Art (July- November 2017). Her porcelain installation, owned by this museum, was included in the prestigious exhibition, "20th Century Women" (June 8-December 15, 2019). As a galerie artist, Roberta is represented by Galerie 103, Kauai, Hawaii. Griffith continues to actively produce and exhibit new artwork. To purchase artwork contact Roberta, To buy a publication: "Artists of Hawaii 2013," "Roberta Griffith A Retrospective", "Roberta Griffith Installations 1988-1998" or the video, "Roberta Griffith: The Artist Within," by La Paloma Films, check out the sales page.